The Anthology Of Sifu Colin Dunn 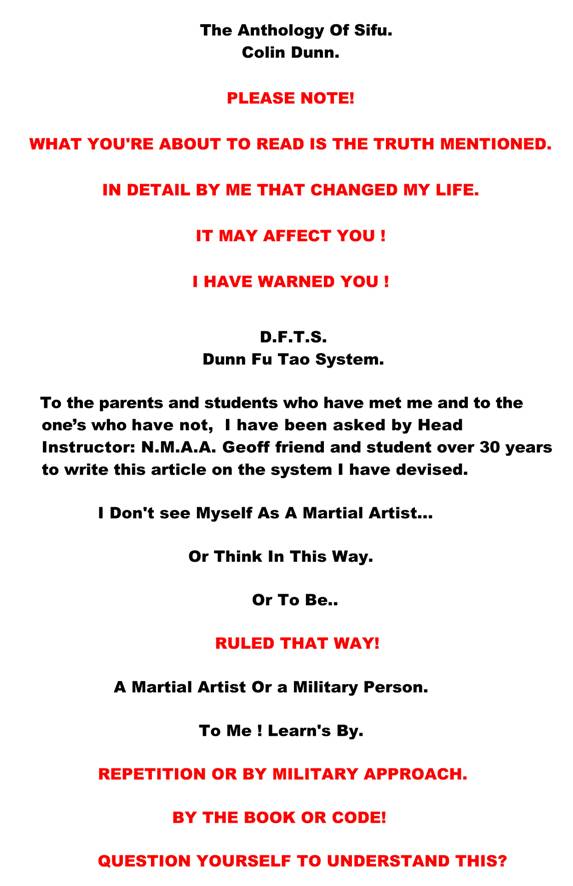 This is an “Extract Only”from part 1 of the full article, download Part 1 here….
Read more by downloading “Part 2″ of this extra-ordinary story here.

This is an opportunity for me to speak to you as well as for all students, Themselves with their skills and for me to see their ability as a good student. This step in their lives will lead them to a better way of thinking, without ego, to learn and change their ways and see how they see themselves in the future. Some will have their own schools as instructors, others although given a chance will not. You must follow a path to care for others, but not by deception as this evil dwells in all of us. We must learn to control our anger as you have learnt to protect others and be a good person in all aspects. To show no anger and be in control of your emotions will come later in life, first you have to find peace of mind. It has taken me a long time to do this. You will travel this path first and when you are content with life, that will be your destiny.

It’s time now for me to take you back to the 1950’s. Some information in this article is personal but it needs to be mentioned for you to have a better understanding and to feel what it was like in those years. I am an Australian and was born in 1950. My mother is from Irish background and my father Asian. We lived in a suburb called Collingwood. It was a rough place. We did not have a proper toilet, an old tin can and a piece of wood was all we had for a seat and we had to walk way down the backyard to access the toilet. Life was tough in those days. School was a challenge, not looking like a westerner was the hardest part. Being an Eurasian or half caste was not easy in my growing up years.

The war had been over for many years but the struggle continued for many years later. My mother had to work night shift in a boot factory to support us. My father was uncaring, he took advantage of my mother’s financial support and continuously brought his friends home or gambled throughout the night. Most often they would end up fighting amongst themselves. My sister who was six years old at that time would be sitting outside in the gutter crying. While other children my age would be in bed sleeping, I would spend hours comforting my sister and would eventually go to bed 1 .30am.

I would have to go to school the next morning, but not having had much sleep and age of 7, it was very tiring for me and sometimes the school would send me home.. The teacher would blame my mother for not sending me to bed early.

At times during the day the police would visit my mother at home as neighbours had complained about noise the previous night, obviously caused by my father and friends fighting. Why should my mother be blamed for this? Once I mentioned to my mother what my father did while she worked night shift which resulted in my parents not speaking for weeks and my father would beat me often. The walls of the house were thin and the sounds were carried across and the neighbours would call the police. The police were tired of having to go back and forth so often and eventually stopped coming. The gambling continued while my mother worked.

My father worked sometimes in his restaurant. If he did not lose the money he earned on gambling my mother would have been able to stay at home and look after us. He was too greedy and did not care about us. I hated him for doing this. My mother once told me “we do not need his money or his friends”. The only person who did care for us was my uncle. He was different and he would make sure I attended school which made my mother happy. Going to school did nothing good for me. I was picked on and bullied and the teachers would do nothing to help. I was on my own and if someone did help me it was always an outsider. My mother did not like what was happening in school and questioned them as to why I was picked on and bullied. The school would say it was all done in fun. My mother pleaded with my father to do something but he didn’t.

For years this went on and my parents continued yelling at each other, my father constantly walking out and my mother always crying. I was glad my sister did not have to go through all this. The pain and suffering would have been too much for her.. My mother sent her to some close friends to be looked after. These friends would do anything for my mother and my sister was in good care.

Now I will take you back to a day when I was punished by my father my uncle gave me a small bottle of coke which cost about 6 pence at that time. I recall my father not being in his restaurant. I was thirsty and asked my uncle for a drink, he gave me the bottle of coke. My father walked in and went into a rage. He snatched the bottle from my hand which nearly broke my fingers. Uncle Quay tried to tell my father not to blame your son as it was not his fault but my father would not listen. My uncle worked with my father.In the restaurant and they had been good friends for a long time. My father was so angry he told my uncle who argue with him to leave the restaurant and my uncle left.

It was my turn now for the punishment. My father made me sweep the floor in the kitchen with a broom that I could hardly push along. My father placed a bucket of hot water in front of me (hot water was to soften the skin of the chooks) and I was sent to the backyard to pluck the feathers off some chooks, The floating feathers in the water and the horrible smell would make anyone feel sick. I was crying while doing this and was bitten by insects in the process. When I finished what I was told to do it was about 3.45 am. All this time my father was gambling in the restaurant, I could hear their voices from the window, the door was locked and I could not get in, I tried knocking over and over again but they were making too much noise and could not hear me knocking. I fell asleep outside.

I did not go to school the next day and my father took me into the city where he gambled in what they called “Opium Dens”. Due to lack of sleep I would start to feel drowsy and that’s when he would hit me. If he lost his money he would hit me again. When we got back to the restaurant he started throwing things around in a temper – pots, pans, food would be all over the floor. When he was in a rage it scared me. He made me clean up the mess in the kitchen while he would listen to the radio and check how his horse race fared. If he lost I knew where to hide. My mother once told me “your father likes to gamble but he is a bad loser”.

On and off my mother told me things about my father. Much later when I was growing up my mother told me that my father tried to sell me when we were all on board the ship travelling to China. I was about 11 months of age at that time. Fortunately (for me and for some of you) my mother prevented this happening.

This is an “Extract Only”from part 1 of the full article, download Part 1 here….
Read more by downloading “Part 2″ of this extra-ordinary story here.

Due to the current Covid 19 Virus issues please be advised that all physical classes at NMAA have been closed.

We are looking at providing all members with access to our video library, so that you can continue with your training
over the Government directed restrictions. When we have the technical issues sorted we will send out an email to you all
on how to access and any additional information required to use.

We wish to remind all members and families to follow all the social distancing and cleaning guidelines as outlined
by the DHHS (Department of Health and Human Services) via. their website at: https://www.dhhs.vic.gov.au/coronavirus

Stay safe and well and please keep checking this page for further updates as things are changing quickly in line with Government announcements.